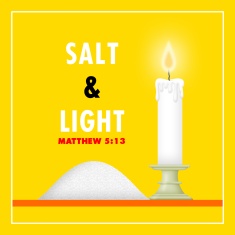 Matthew 5:13-16 [Jesus says], “Let me tell you why you are here. You’re here to be salt-seasoning that brings out the God-flavors of this earth. If you lose your saltiness, how will people taste godliness? You’ve lost your usefulness and will end up in the garbage.  Here’s another way to put it: You’re here to be light, bringing out the God-colors in the world. God is not a secret to be kept. We’re going public with this, as public as a city on a hill. If I make you light-bearers, you don’t think I’m going to hide you under a bucket, do you? I’m putting you on a light stand. Now that I’ve put you there on a hilltop, on a light stand—shine! Keep open house; be generous with your lives. By opening up to others, you’ll prompt people to open up with God, this generous Father in heaven.” The Message

What does salt do in the natural world?  Mainly two things: 1] It cures food and protects it from decay; and 2] It makes things taste better; brings out the flavor.  If, as it says in some other versions, “You are the salt of the earth,” what does that mean in a spiritual sense?  It means we are an integral part of God’s Presence in the earth, keeping it from spiritual decay; being the flavoring that makes everything last longer and taste better.  Sometimes you hear that old expression, “That guy is just ‘salt of the earth’,” indicating that he’s just common ordinary people, but good to the core.  Like saying, ‘good folks’.  But what happens if the salt loses its flavor?  That’s like asking, “What happens if we, as God’s salt, lose our flavor (His Spirit)?”  Then we will be thrown out as good for nothing; and the earth will be worse off too.  Like Mr. Petersen says, “You’re here to be salt-seasoning  .  .  .”  Not so much about what we do as it is about what we be, and that is: people filled with God’s Spirit so He can use us to touch the world.

The second part of this passage says, in other versions, “You are the light of the world.” We are to be the carriers of God’s Light to those in the world who are lost in the dark.  We are to show the light so people can see all the beauty that God sheds on our world.  We not only bring the light so people can see God’s goodness, but also so they can experience His truth, His forgiveness, His Peace and most of all His unlimited Love and Grace.  We get to shine for God’s glory.  We get to tell our stories about God’s Eternal Life in Jesus in us! Wow! Praise the Lord!

So get out there and BE the salt and the light!