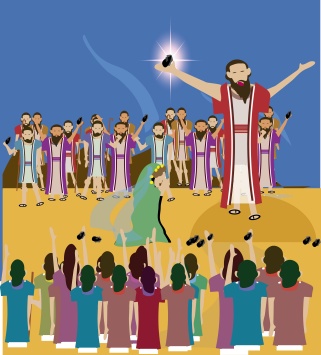 1 Thessalonians 2:14 says, “14 You too brothers and sisters, became imitators of the churches in Judea, because you suffered the same things from your own countrymen, even as they did from the Jews, 15 who killed our Lord Jesus and the prophets, and have driven us out. . . . 1 Thess 3:2, “We sent Timothy to encourage you in these afflictions; . . . 4 in fact we told you in advance that you (we) would suffer persecution.”

We haven’t had much persecution against Christians here in the good ole U.S.A. in the past 250 years; but in the last few decades, there has been a steady stream of attack from some adherents of other religions.  Sometimes they claim responsibility, other times the circumstances speak for themselves.  In a few instances in recent years, people, right here in America have been required to recant their Christian beliefs at the point of a gun or be killed.  Some have stayed the course, stood fast for Jesus, and gone on to glory.

In all my nearly 70 years, I have never been required to make such a decision.  The worst I’ve had is for someone to tell me that I was stupid to believe in Jesus.  But I expect that if we’re real Christians we American Christians will “suffer real affliction for Jesus” in the coming days, as Christians the world over are already suffering.

So the question is: Why would anyone follow Jesus if they knew in advance they would suffer persecution?  Why would they believe that line in the Sermon on the Mount, “Blessed (happy) are you when men shall revile (insult) you, and persecute you, and say all manner of evil against you falsely (lie about you) for My sake.  Rejoice and be exceedingly glad, for great is your reward in heaven; for so they persecuted the prophets who were before you.”  Why would they ‘join up with Jesus’?  Maybe there’s something more going on here than meets the eye.

Maybe it’s because people’s hearts are being changed; because of God’s great mercy; because of the precious gift of having God’s own Spirit living in our hearts.  This is a supernatural event.  This is not just a religious activity of the traditions of men; it’s a movement of the Lord God Almighty, who has called us out of the darkness into His marvelous Light.  Yes this is a great battle between the armies of Satan and the Host of God, between good and evil.  Ultimately we (God’s children) will overcome and triumph; but this great war has already begun, and in order to win we must stand up and stand fast for Jesus.