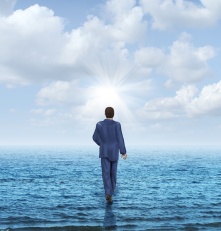 This is a great story!  It has all the ingredients of a growing relationship with Jesus.  Everybody knows that Jesus walked on water.  There are three times in the Bible that mention Jesus “walking on water” or “walking on the sea”.  Often people use this as ‘best evidence’ of Jesus deity, that He was able to walk on water, when no one else could.  But this was Peter, just a common, ordinary human, like you and me.  They didn’t wear pants in those days, but if they had, he would have put his pants on one leg at a time, just like you and me.  Peter did a lot of good stuff in his time on the earth, but he also did some bad stuff, and occasionally some really stupid stuff.  But Jesus chose him, and Jesus loved him.  And Peter walked on water.

There had to be something going on in Peter’s heart (and imagination) for him to even think to say, “Lord, if it’s you, make me walk on the water.”  END_OF_DOCUMENT_TOKEN_TO_BE_REPLACED