In Mark 7:26-30: it says,  “The woman was a Greek, [a non-Jew from Phoenicia in Syria] and she kept asking Him to cast the demon out of her daughter. But Jesus said to her, “Let the children be filled first, for it is not good to take the children’s bread and throw it to the little dogs.” 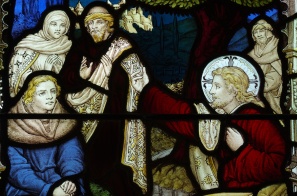 And she answered and said to Him, “Yes, Lord, yet even the little dogs under the table eat from the children’s crumbs.”  Then He said to her, “For this saying go your way; the demon has gone out of your daughter.”  And when she had come to her house, she found the demon gone out, and her daughter lying on the bed.”

So Jesus says, “It’s just not right to take the blessings that belong to the Jews and indiscriminately throw them to the outsiders.”  And the woman, being a non-Jew, is referred to as a dog, to her face.  It’s almost as if Jesus is trying to rile her; to see if she’s serious about getting the blessing she seeks.  She must be serious; ‘cause she completely ignores the personal attack and says, in effect, “I don’t care what you say about me; I just want you to help my daughter.”  (She knows that her pride and her ego don’t matter, when her daughter’s life is at stake.)

To me that’s the message of this story: When we have enough faith in Jesus, we too will let nothing (even our selfish pride) stand in the way of our trusting Him.  When we do that, He will help us; and He will get a kick out of our faith and our spunk, just as He did with this woman.